'Save me from an arranged marriage': Man advertises himself on billboards to find a wife 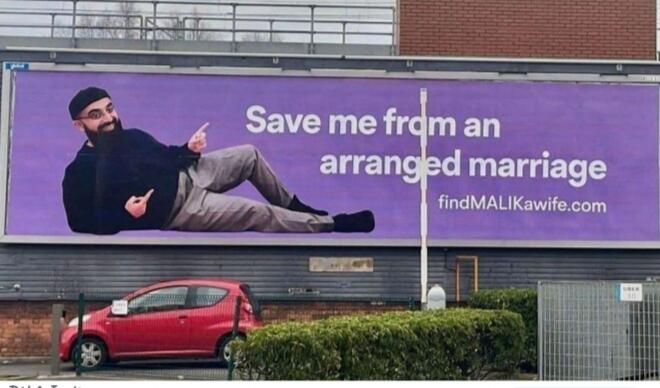 When it comes to finding a partner, it can be brutal out there, and most desi kids have the threat of an arranged marriage hanging over their heads if they can’t find someone, but one man’s attempts to save himself from that fate have us and the rest of the internet laughing. Muhammad Malik, 29, literally put himself out there – on billboards, no less – to avoid an arranged marriage.

The Londoner posted signs around the UK city of Birmingham that read “Save me from an arranged marriage” and included a link to his website findmalikawife.com so potential suitors could learn more about what he’s looking for in a companion.

“Huge thanks to anyone who’s messaged in support or has applied to be my wife, I see you don’t worry!! I’ve been overwhelmed with all the messages but I love it, pls keep them coming, I’ll get back to you as soon as I can inshallah,” he captioned an Instagram picture of him standing in front of his billboard.

In a video on the website, he introduced himself as a religious entrepreneur and foodie looking for “someone who’s working on her Deen.” He stated that he is fine with any ethnicity, but because he comes from a loud, Punjabi family, “the banter has to be 100 percent.”

He included a contact form on the site for anyone interested, as well as his social media handles for Twitter, Instagram, and Facebook, which were flooded after his antics went viral. According to Birmingham Live, he has received a flood of responses, for which his friends are creating spreadsheets to sort through.

In the FAQs section of his website, he clarifies that he is not opposed to arranged marriages, but simply wants to “try and find someone on my own first.”

"I just haven’t met the right girl yet. It’s a difficult world out there. To be seen, I needed to buy a billboard "He explained.

Despite how amusing his antics appear to the public, they appear to have helped him find several candidates. Whatever works, we suppose. Do you think it’s a good gesture to save yourself from an arranged marriage and what can be other ways to do so? Let us know in the comments section below.