Shooting stars: What they actually are from the Islamic perspective! 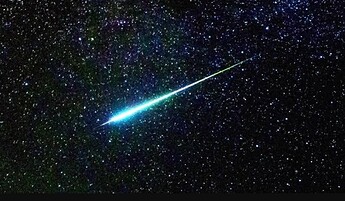 ”And indeed we have embellished the lowest heaven with lamps, and we have made them (to serve) as missiles to drive the devil away, and we have prepared for them the punishment of the blazing fire." Quran 67:5

Now, this is something that contradicts the very concept of shooting stars.
The ayah reveals that the stars apart from serving as an ornament for the sky, and as a guide for travelers are also a weapon used against the shaitan. Before the prophethood of Muhammad SAW, the jinns and shaitans used to eavesdrop on what was planned and done in the celestial domains. This way they were pre-informed about the future. They would go to the earthly fortune-tellers and give them the information. The fortune-tellers in this way(by telling about the future) were successful in misguiding the people. But this state of affairs could not pertain after Prophet Muhammad SAW came to the world. After that, a ban was imposed on the jinns and shaitans, and they were unable to reach the terrestrial realms as it became covered with flaming stars. These flaming/shooting stars presumably were a source of strong waves called “pulsars”. They are defined as rapidly rotating neutrons emitting robust energy in the form of electromagnetic radiation.
We as Muslims are obliged to believe whatever Allah says in the Quran without getting into logical reasoning. No doubt Allah has ordered us to pay heed to the signs by observing our surroundings but that exclusively is to realize the greatness of Almighty.
The concept of meteors and shooting stars expounded by the Quran makes the wish-making antic absurd!!! How does that even make sense to make a wish on a stone pelted on the jinns and shaitan?
So when a Muslim sees a shooting star he as narrated by Ibn e Abbas should say
“Oh, Allah aim it at him, and hit him and suffice us from his evil”.