The website of the Sindh Investment Board website was taken over on Tuesday by an unidentified hacker who also defaced it to demand that the government shut down schools amid the rapidly rising coronavirus cases across the country.

The message “Hacked By Anonymous. This is a warning message to Pakistan Government” from the hacker claiming to be linked to the infamous international hacker group ‘Anonymous’ appeared when the link https://sindhinvestment.gos.pk/ was opened.

The hacker also stated: “Student Lives [sic] are no joke! Shut the Schools down now. Students are the real assets of a country, don’t destroy your assets”. The frozen website now displays the text “Under Construction”.

The minister had explained that students in Sindh had been given extended holidays earlier due to the COVID-19 pandemic and that there is currently no allowance for winter break.

“There’s no question of winter vacations right now,” he had said.

Ghani had, however, stated that the final decision on the matter would be made during the National Command and Operations Centre (NCOC) meeting that is scheduled for Monday, 23 November. 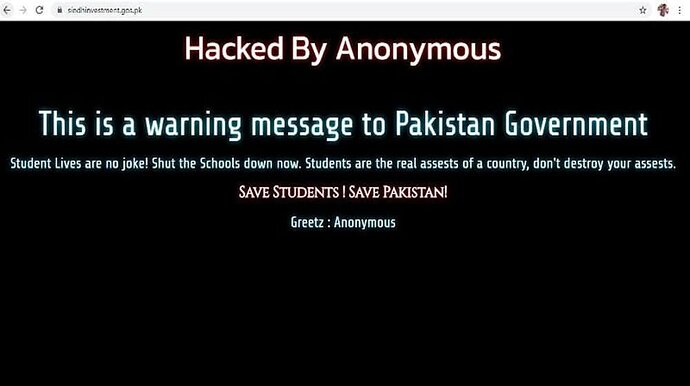