Recently, a video of an elderly man went viral on the internet, in which he shared his story of struggling to live in an inflationary period. Abdul Rasheed, a 58-year-old man with only a sixth-grade education, makes money on the streets of Karachi by dressing up as Spider-Man and entertaining children passing by. 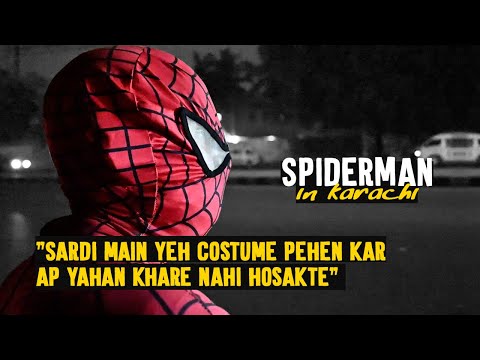 Abdul Rasheed stated that he walked far from his home and arrived at a specific location near Aga Khan Hospital in Karachi, where many people with children recognized him as Spider-Man and assisted him by giving money. Rasheed has worked in many luxury hotels, but due to the pandemic, his life was turned upside down, and his pay was reduced to the point where he was unable to do any other work.

Rasheed faced adversity and became deeply in debt. He borrowed more than a lakh from relatives and neighbors and is unable to repay it. As a result of this, he purchased a Spider-Man costume, which he paid for with money borrowed from a friend.

Rasheed has a large family, but they all live in Mansehra; however, he visits Karachi frequently and hasn’t seen his family in over a year and a half. He lost his wife a few years ago, but despite several difficulties, he supports his family on his own.

Rasheed has incurred significant debt as a result of the coronavirus pandemic; however, he is concerned about repaying his loan and financially supporting his children for their college expenses. Rasheed is no less than a hero in our society, as he has not given up and is working extremely hard to survive in this difficult time.