Statue of Trump removed from a museum post vandalism! 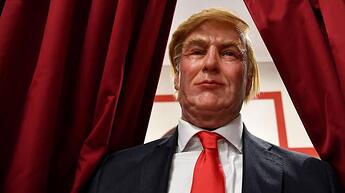 images (14)739×415 24.1 KB
A wax statue of ex-President of US Donald Trump has been removed from a museum in downtown San Antonio, Texas after it was bashed and vandalized continuously, according to foreign media reports. Trump’s statue was shifted into storage at the Louis Tussaud’s Waxworks after it endured numerous punches.

Over the past few days, visitors kept on punching and jabbing Donald Trump’s statue in the museum.

Clay Stewart, regional manager of parent company Ripley’s Entertainment, said that the scrapes on Trump’s statue’s face were particularly harmful.
“When it’s a highly political figure, attacks can be a problem,” Stewart added.

Donald Trump’s statue will not return to the display floor until the new wax figure of President Joe Biden is added into the rotation.

Clay Stewart said that it is presently still under production in Orlando.

Joe Biden, an American politician, defeated Donald Trump in the 2020 United States presidential election. Joe Biden was inaugurated as the 46th President in January 2021. Kamala Harris assumed office as the Vice President of the United States.

Hahaha he actually deserves these punch😐

Hahaha he deserve it

Lol he deserves it

Wow Trump deserve more than that

LMFAO he deserves it

Hahaha that’s so funny Trump deserves more than that surely​:joy: