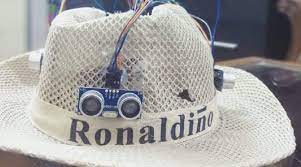 Muhammad Ahmed , a student in Lahore has developed a unique cap for visually impaired people. He said that his innovation will end dependence of visually impaired people on canes used to detect obstacles while walking on streets and in markets.
Sharing the working of his cap, he said that it uses two sensors, that detect anything coming in the way of some 2.5 meters, alerting the blind people of the hurdle through vibrations.

“If there is a hurdle on the right side, the vibration of this side will go on; in case of the left side, the left vibrator will act while in case of a hurdle on the front side, both the vibrators will act simultaneously,” Ahmed said.
The student said that a sound mode was also developed in the device in order to alert the visually impaired man in a rush place, where vibration sensors could not perform in a better manner. He said that the sensors used in the cap were basically used as the car parking sensors.
“I wanted to distribute it among the people suffering from vision loss free of cost and need help from the government in this regard,” he said adding that he was working on the project for the past year and it needs some more improvement.
for more,
https://www.facebook.com/watch/?v=878006979430191

Great. We should appreciate our students for their greatest work for the humanity.

cool the sole meaning of life is to serve for humanity

MashaAllah he was chosen to help blind people

May Allah grant him more success❤

Yeah right…a hero for them❤