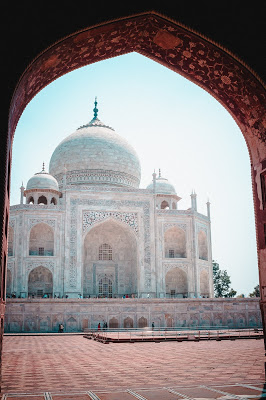 The tomb of Shah Jaha’s own father provides the model for minarets.

The four Pishtaq is inspired by his grandfather Tomb.

The dome is inspired by Ulugh Beg Madrasa in Samarkand.

Taj Mahal is the architectural embodiment of this life and the next according to Islamic belief.

The ground plan represents this duality of life and the afterlife.

The complex is split between its tomb garden and mausoleum.

The color scheme of the Taj Mahal is deeply symbolic.

The worldly elements and other buildings are all clad in red stone.

The pure white stands for the Spiritually and faith of the person buried here.

The Garden is the heart of the Taj Mahal.

It is an earthly representation of paradise described in the Quran.

The garden is divided into four squares.

The channels along the paths represent the river of paradise milk, honey, wine, and water mentioned in the Quran.

Where the channels meet, there is a pool.

The Taj Mahal itself demonstrates the link between India and Europe.

Technique and Motifs traveled from Europe to adorn the entire interior of the Taj Mahal.

These mosaics of semi-precious stones are called Pietra dura.

This craft was used to decorate precious places during the renaissance.

This technique directly or indirectly traveled from Italy to India.

Unfortunately, no chronicles record the name of the artist who decorated the Taj Mahal.

The coffin seen in the Mausoleum is only a cenotaph an empty monument.

Mumtaz Mahal lies in a secret marble chamber below the Taj Mahal, where she rests undistributed.