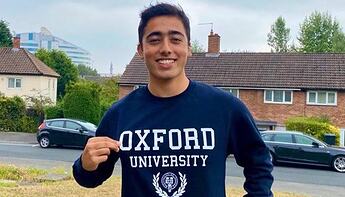 images (12)700×400 54.8 KB
The survivor of the Army Public School (APS) attack in Peshawar, Ahmad Nawaz took to his Instagram handle to declare that he has been elected to the governing body – standing Committee of Oxford Union in the University of Oxford.

He said that " Alhamdulillah I’m very excited to share that I have been elected to the Governing body – Standing Committee of Oxford Union in the @oxford_uni. It’s an honor to be part of one of the biggest platforms in the world.
It’s been six years to the ruinous day when Nawaz was shot in his arm by a Taliban gunman during a terrorist attack at his school in Pakistan. He was 14 at that time. His younger brother, Haris Nawaz, however, unfortunately, was one of the students massacred by the Taliban gunmen. Ahmad was saved from their animosity as he feigned to be dead.
After that he was taken to USA for the treatment of his wounds. He stayed there ever since and got admission in the Oxford University in 2020. His father also congratulated him.

Indeed after every hardship, there is ease💟

One of the real heroes of Pak