The Clash of Ideologies in the Name of Islam 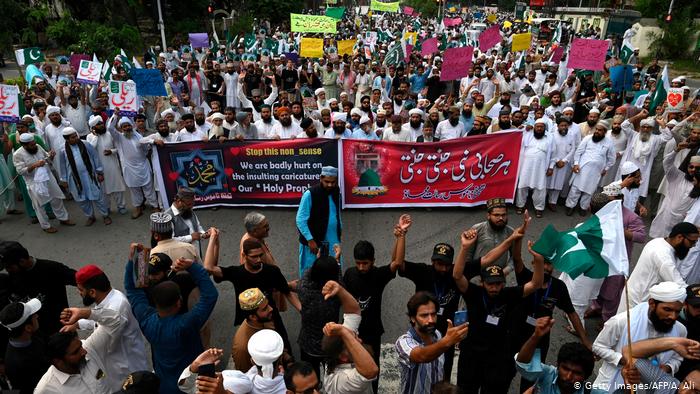 700×394 81.6 KB
There is an interesting observation that the incumbent Prime Minister, Imran Khan, makes in his book “Pakistan: A Personal History”. He makes the point that throughout the years, the Pakistani Society wants Islamic Law to be implemented throughout the country. However, this society also does not largely support religious leaders. This paradoxical circumstance can be explained by the mainly corrupt stances of these leaders. It can also be explained by the people’s lack of understanding of actual Sharia Law. Nevertheless, as the years have gone by and people from many political spectrums have integrated themselves into the modern era, there appears to be a clash of ideas. Examples of these clashes can include Sunni-Shia riots, violence against Ahmedis and more recent Aurat March. Or even in general, we see people being hypocritical because of what they believe in versus what they actually do. This article takes a deeper look into the Pakistani people’s beliefs. Through examples, we shall see if Pakistan is even worthy of the title “The Islamic Republic of Pakistan”.

Before I progress further, it is important to note that I am not an Islamic scholar and that people are allowed to believe what they think the truth is. This is just an opinion.

Firstly, to explain this clash, we take the example of the Sunni-Shia riots. Shia people have their beliefs, such as performing Tatbir on the day of Karbala. Now people from other sects might have preconceived notions that this act of Tatbir is going too overboard, or that they believe that Hazrat Ali (R.A) was the Prophet after Prophetpbuh, or that they don’t believe in Prophet Muhammad (S.A.W). Therefore, verbal abuse is blasted at Shias and not long after, blood is shed. Due to these notions, Shias are marginalized, discriminated against and isolated from society. The reason for this is first, people believe hearsay and do not do their own research and two, the people are uneducated and hear that Shias are Kafir from a so-called mullah. Why is this unnecessary bloodshed happening when conversations from both parties can more than resolve the issues?

This phenomenon can also be understood by the discrimination towards the Ahmedi minority. While I agree that this minority is non-Muslim and should not be described under the fold of Islam, the killing of these people is condemnable. There was news of a child killing neighbors who were Ahmedi. I seriously do not get why our people can’t rationalize their arguments coherently. Disagreement does not mean kill the person you are disagreeing with. We are better than this. When prejudices are instilled in the mind of a person, that person does not hesitate to make assumptions about a community. And these assumptions lead to violence.

The more recently talked about and controversial clash is the one between Aurat March supporters and right-wing media. Both viewpoints these parties gave are right in their own sense. But there are flaws in both parties. As for Aurat March, the slogan of “Mera Jism, Miri Marzi” is a translation of “My Body, My Choice”. This slogan is actually a USA-originated slogan when women there demanded abortion rights in the 1980s and 1990s. Another slogan would strongly be recommended in order to not let people get the wrong idea about the actual reasoning for the March. Also, many supporters lean left on the political spectrum, leaving them prone to Westernized ideas. There is news of TV actress Mehr Bano advocating for homosexual rights which seems inappropriate in an “Islamic” nation. Other than this, I support the March. Whereas the media has propagated this March so wrongly by saying that the March was an attack on Islam by framing that the people were saying blasphemous things. However, the part they got correct is the integration of Western ideas on the agenda.

This was a video by Raja Zia ul Haq about the Aurat March which garnered much attention. The only critique I have of this video is that if he is advocating for a movement from the men’s side to support the March then he should be the one leading the change. He should not ask for women’s permission to lead a March if he knows what he believes in is correct.

There is also the issue of music being Halal or Haraam. The consensus would conclude it to be Haraam but there is plenty of complexities in this matter. However, we will not deal with it as it would become another discussion altogether.

The thing that not just Muslims here in Pakistan need but Muslims worldwide need is advances in Muslim theology. Since the golden ages of Islam, not one modern Muslim theologist has come forward to present his or her research. This is primarily because people don’t want to major in Theology. But to rid ourselves of these prejudices requires a change in paradigms. New and better philosophical thinking must be established for change in the intellectual mind as well as reform in our way of thinking about ourselves as Ummah and about others. May we as Muslim Ummah achieve reformation. Ameen.

People are strongly criticizing the actress for her extreme views in favor of homosexuality in a Muslim society where there is no space of gayism and absolutely freedom of women.

Teenage boy guns down Ahmadi doctor, injures 3 others at their home in Nankana

Police say the suspect was taken into custody who "confessed to having attacked the family over religious differences".

The use of evidences and references increase the credibility of your work. Good job