The first helicopter flight at mars; to be very soon

Human has always craved for looking into depth of oceans and at the height of mountains. The success in all such discoveries made the human-brain even more curious and restless over the animate entities which are/were beyond reach. The areas of universe which were almost unknown a couple of centuries back, are wide-open today. Yes! Human has set the target to the Mars- The Red Planet. 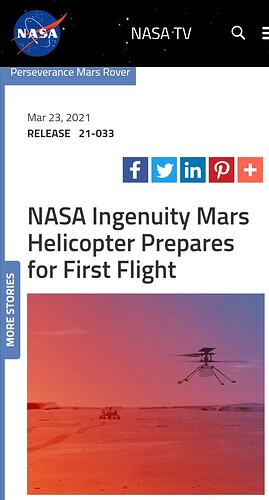 NASA is targeting no earlier than April 8 for the Ingenuity Mars Helicopter to make the first attempt at powered, controlled flight of an aircraft on another planet.

Let’s get ready for latest and more interesting exploration

Let’s see where does our future lead us to!

It would be a great achievement