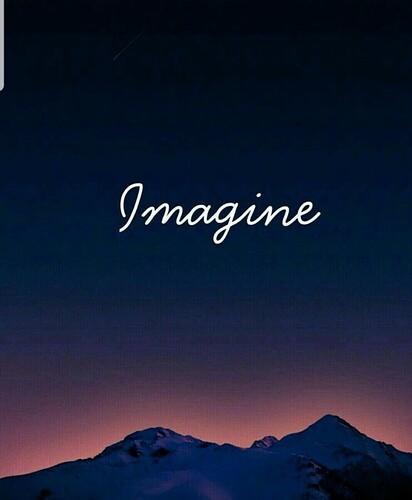 Imagination is the ability to produce and simulate novel objects, sensations, and ideas in the mind without any immediate input of the senses.
Many Muslim thinkers employ the Arabic words for imagination as khayal or mithal (to refer to the intermediate domain of fire or soul). The Quran and Hadith provide support for employing these words.
The Prophet (SAW) used this term imaginalize in a number of interesting hadith. In the famous of these, he said , Satan cannot imaginalize himself in any form". Most people understand this to mean that when someone sees the Prophet’s imagine in a dream, it is truly his image and not a satanic deception. In another hadith he said, “The Garden and the Fire were imaginalized for me in this wall”.
When something is imaginalized, it appears to someone as an image. This apparition is considered to be “imaginal,” not “imaginary” which is to say that it has a certain reality that needs to be considered. We can’t simply say, “You are imagining things”.
Imaginal things share the attributes of two sides, just as the soul shares the attributes of spirit and body. The common example of imaginal thing is the image in a mirror. Your mirror image is both yourself and not yourself at same time.
If we look inside ourselves, the best place to find imaginal things is in our dreams . Here we have a tremendous diversity of objects and people that are both themselves and not themselves, or both ourselves and not ourselves. The tree you see in a dream is tree, it is not a frog or baseball. Yet, it is not a tree, if we mean by tree something that grows in the ground in the physical world. Or again, the tree that you see in a dream is both you and not you. It is not you because it is a tree. And it is you because it is simply the picture of a tree as imagined by you. The domain of dreaming is the soul. Hence, the soul is often called the “microcosmic world of imagination”, while the world where jinn and satan lives is called the “macrocosmic world of imagination”. The microcosm is the human individual, while the macrocosm is the whole cosmos.
One of the important characteristics of imaginal existence is constant change. Imagination doesn’t stay the same for two successive moments. Nothing in the world of intermediacy is fixed. Every dream image is constantly in the process of being transformed into other images.

Brilliant… More power to you

wow very nice topic and smothly explained .keeep it up