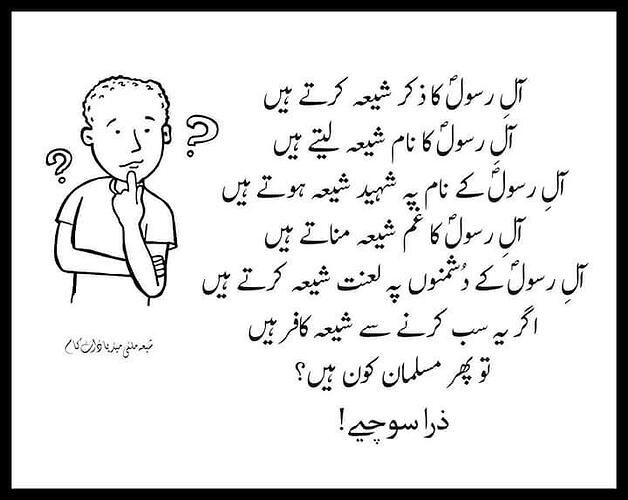 Today while talking to a friend, the topic of shia sunni controversies, came out. During the conversation a question came to my mind. The one’s who’re unstoppably posting their hatred filled views on shiat in the days when they don’t even mourn over those who they lost. They dedicate their days and nights mourning the 72 martyrs of karbala, the ahlebait, the families and children of the martyrs who faced extreme atrocities. Whenever someone is critisized for not doing hijab or doing something thats forbidden in islam the most common reply we hear is “sb ko apne amal ka jawab khud dena hai”. Why not we do the same? Why don’t we let people follow their beliefs why is it so necessary to put your nose is someone’s else’s business? The one’s posting their controversial posts I really want to know how many times have you targeted Hinduism? or Budhism? or Christianity? Or aethists? Are they muslims? Are they following Islam? Do the even believe in tauheed!!?? No the don’t but some minds are soo toxic as hell that they just target the shias who believe in tauheed, who believe ne akeeda e khatam e nabuat, who pray 5 times a day, who have the same Quran. Please shut your mouths and worry about yourselves. (ps: dusron ko gunahgar kehne se pehle apne gireban me zarur jhankain)
~ramsha.