The State Of Kashmir 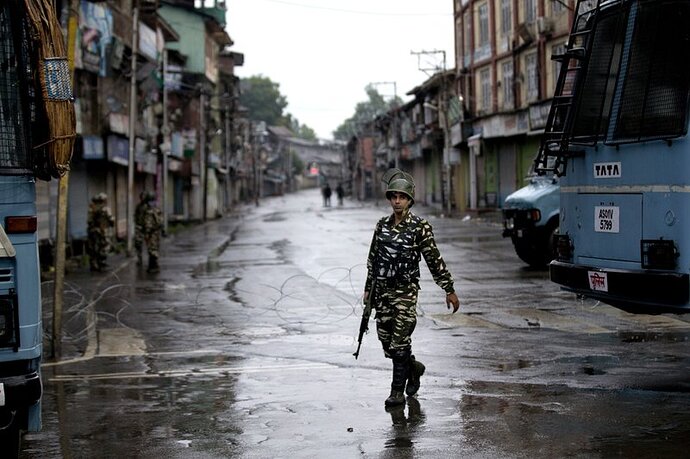 800800×533 88.2 KB
Guys let’s today talk about the conflict of Kashmir, called as heaven on Earth. The State of Jammu and Kashmir is situated in South East Asia. This state is contoured to Pakistan, China, Tibet and Afghanistan.

This conflict is not a new story but this has a history. This all began when the British took charge of the Indo-pak subcontinent. The British Government sold the whole area of the state to Dogra Raja, Gulab Singh for Rs. 75 lacs only in the year 1846. The Raja and his successors played havoc with the Muslims of the state. The Muslims were crushed socially, economically and culturally.

The struggle for Independence from the Dogra atrocities started much before the Pakistan movement. The Raja restated the freedom fighters with an iron hand but the spirit for freedom can never be crushed through atrocity. Kashmiris even today, are struggling to win the destination of freedom. They aspire for annexation with Pakistan “Kashmir banay ga Pakistan” is the main slogan of Kashmiri people. The State of Jammu and Kashmir is very close to Pakistan both on religious as well as geographical grounds. Most of the revivers that irrigate the soil of Pakistan flow from Kashmir. Kashmir is emotionally attached to Pakistan. Therefore, they pressed the Raja to join Pakistan at the time of Independence of India and Pakistan in 1947. The total population of the State of Jammu and Kashmir was 4

million according to the census of 1941. Muslims are the majority in this area. The area of the state was 84471 sq. km. It was the largest princely state in the Sub-continent at the time of independence.

Raja did everything to crush the freedom movement of the Kashmiri people. He slaughtered 2 lac Kashmiris but the movement got momentum with time. Being unable to handle the situation in Kashmir, the Raja requested India to come to his rescue. Indian government offered help on the condition to get Raja’s signature on the document of annexation. Raja utterly refused and the Indian government prepared a fake document of annexation in which the state of Jammu and Kashmir had annexed with India.

The Kashmiri people did not lose heart even after such a grim situation. They kept on fighting with the Indian army for their independence until they liberated a large area of Kashmir. This is under the control of Pakistan and is called Azad Kashmir.

• Both the parties (Pakistan and India) were advised to accept a cease-fire.
• The dispute of Kashmir must be resolved according to the aspirations of the people. For this purpose, a plebiscite was to be held.

This tyranny led to two wars between India and Pakistan in 1965 & 1971. The wars resulted in nothing but blind bloodshed. This conflict is a major threat to peace in this region. The dispute of Jammu and Kashmir has not been resolved for many decades. India has sent a large number of army personnel in the valley of Kashmir who are writing chapters of tyranny on the annals of history. The problem of Kashmir is still pending on the agenda of the United Nations. Now and then, thousands of people are killed and thousands of women have been raped by Indian Army in Kashmir. If we humans stay quiet over this killing of thousands of humans, humanity has to be questioned. It’s our responsibility to address this unheard voice of Kashmiris in this conflict.

Inshallah Kashmir will get justice💟

Military action is not the solution. Important is what UN does. While UN is sleeping at this issue because they don’t care. They just care about their interests.

I see the Kashmir issue more on humanitarian grounds than political ones. Humanity is above everything!