The troll in the dungeon tested positive for Covid-19 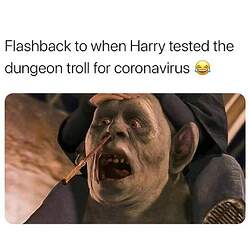 FB_IMG_16159552079181080×1080 66.7 KB
A troll in the dungeon was a threat in Hogwarts especially these darkest times when COVID-19 spread all over the wizarding world. Who even knew they had a dungeon in the most hallowed grounds in Hogwarts? Let alone a troll inside it?

Rumors had it that a troll on the loose was a carrier of an invisible virus the wizarding world had ever known. Doctors at St. Mungo’s detected that the virus originated from a troll which by accident had eaten a wild bat in the forbidden forest.

Now, by mere chance, the trio, Harry, Ron and Hermione followed a mysterious sound leading to the underground passage to Hogsmeade. With her Alohamora charm, Hermione unlocked the door and it opened while a troll in the dungeon ready to attack the trio. Harry immediately cast a Petrificus Totalus as Ron and Hermione punched the troll until it dropped unconscious to the ground. Immediately after, Hogwarts guards on duty brought the troll at the left wing of Hogwarts to Madam Pomprey’s clinic.

Hogwarts faculty and students celebrated for a pompous dinner following the capture of the troll. News came all over Hogwarts that Madam Pomprey performed PCR test to the troll and it tested positive for COVID-19.

By early morning, medics from St. Mungos Hospital will be coming in to Hogwarts to fetch the troll for another series of swab test. He will be isolated thereafter and will undergo quarantine for the rest of his life.