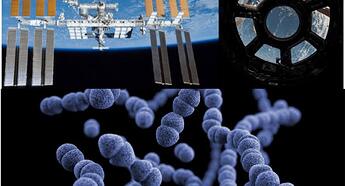 Researchers working with NASA have discovered and isolated 4 strains of bacteria living in different places in ISS. They confirmed 3 of which were completely novel to science. They belong to the family methylobactericae. They were identified across two consecutive flights to ISS. The first strain was identified as Methylorubrum rhodesianum. The other three were undiscovered and completely new to science.
Astronauts in ISS have been growing food for years and obviously plant related microbes have to be around. These bacteria are capable of motion. These are given designations IF7SW-B2T, IIF1SW-B5, and IIF4SW-B5.
These belong to methylobactericae that is usually found in soil and fresh water. These species are involved in nitrogen fixation, plant growth promotion and biocontrol activity against plant pathogens. Therefore scientists suggest that the strains might possess biotechnologically useful components for the growth of crops in space.
NASA space plans involve taking humans to mars, this can be a major breakthrough in that mission. But still further experiments are required to explore the potential of using these animals in space farming.
Source: Microbes Unknown to Science Discovered on The International Space Station

It will be amazing if these microbes will really help in growing crops in space!

Informative i didn’t know this before…