According to the World Travel and Tourism Council, the direct contribution of travel and tourism to Pakistan’s GDP in 2016 was US$7.6 billion (PKR 793.0 billion), constituting 2.7% of the total GDP. By 2025, the government predicts tourism will contribute ₨1 trillion (US$6.0 billion) to the Pakistani economy. This statics can go beyond if we work on our tourism industry.

The tourism of religious and sacred places earns a huge amount. The country who own such territory is a tourist attraction spot today. Let us take the example of Saudi Arabia a home to millions of Muslim’s sacred places, Together the Hajj and the Umrah add $12 billion to Saudi Arabia’s GDP per year, which accounts for 20 per cent of the country’s non-oil GDP and seven per cent of total GDP.
Pakistan also has one of the best-sacred places in the world for Buddhist, Sikhs and Hindus. There is a small town in Punjab named as Panja Sharif and there is a natural stream of water, it is as important to the Sikhs as Aab-e-zam zam to the Muslims. The opening of Kartar Pur by Prime minister Imran Khan is expected to generate revenue of $365,00,000. If we bottle up the water of this stream and sell to the world community of Sikhs, Pakistan can generate a huge capital through it.

There are so many historical statues of Buddhism in Museums of Pakistan that can attract the Buddhist community from china Korea and other areas of the world. Julian is a ruined Buddhist monastery dating from the 2nd century CE, located in Pakistan. Pakistan witnessed one of the oldest civilizations, like Moen jo Daro, Harappa and Ranikot Fort is also known as The Great Wall of Sindh and is believed to be the world’s largest fort, with a circumference of approximately 32 kilometres. The religious, historical and adventurous tourism brings support to the state economy.

Iran is also a tourist attraction country for Muslims. According to the latest study by World Travel and Tourism Council (WTTC), Iran’s travel and tourism sector grew by 1.9 per cent in 2018 to contribute 1,158 trillion rials ($8.83 billion) or 6.5 per cent of overall GDP and 1,334 jobs (5.4 per cent of total employment) to the country’s economy. Iraq, on the other hand, receives some $3.7 billion annually in tourism revenues, according to the World Travel and Tourism Council.

In this world of technology, nothing can work isolated. Tourism and technology can only work inextricably. The world has made tourism so easy that within the few minutes we can book our hotel, rent a car and air ticket rather than going to offices. There are many countries in the globe where a customer can see his booked room through 360 virtual looks and can select or reject room. Pakistan has one of the best mountains and peaks with a fine curve to skate. Most of the westerners don’t get a perfat curve to skate on and Pakistan offers a great number of those curves but unfortunately, most of the westerners are unaware of this opportunity. Pakistan has a good number of beautiful rivers and streams where boating is the best adventure, Pakistan holds one of the best highways and motorways for travelling.

The tourism market is easy and cheaper, what we have to do is connect the Pakistani diaspora in the whole world and create an app through which we can hold them together, then all we need to do is buy them a broachers of tourism where different deals are mentioned. People shall request westerners for few minutes and put on the VR box to Let the English visit a mountain of Gilgit Baltistan, rivers of Hunza and beauty of Pakistan virtually. This activity will boost our mission as well as make a large number of our diaspora employed.

Including this Pakistan shall offer ease in travelling and a fine number of cheap deals that really attract tourism. Singapore, Dubai and the US have no natural beauty they have only lightening building created by men. Pakistan must book screens on different spots of the world just like Times square of new York and play a good documentary film that shows our tourism advertisements on international crickets boundaries too.

Our travelling facilities must make their own websites as people who are ready to explore our beautiful Pakistan shall not feel difficult about booking his room, car and other stuff. Those websites also shall show our tourism advertisement. In Sindh there is one of the great tourism attraction called “Gorakh hill station”, Recently few people were robbed upon the hills. Security is the main reasonon that can make our tourism go smoothly our law and enforcement departments must ensure safety to its citizens and their stuff. Pakistan has four kinds of weather, great diversities of natural fruits, blossoming trees and much more. 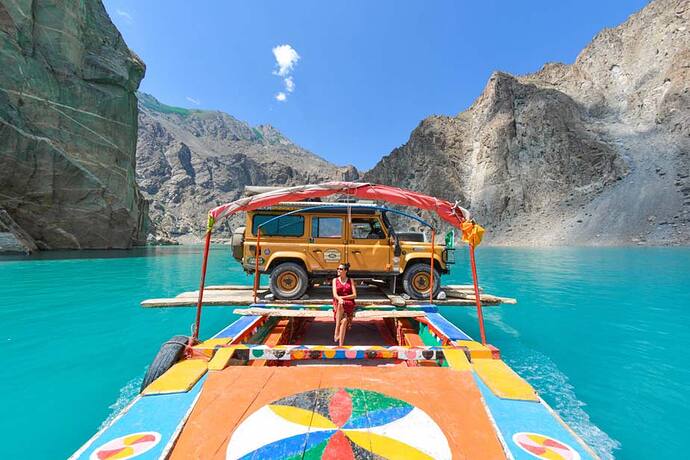