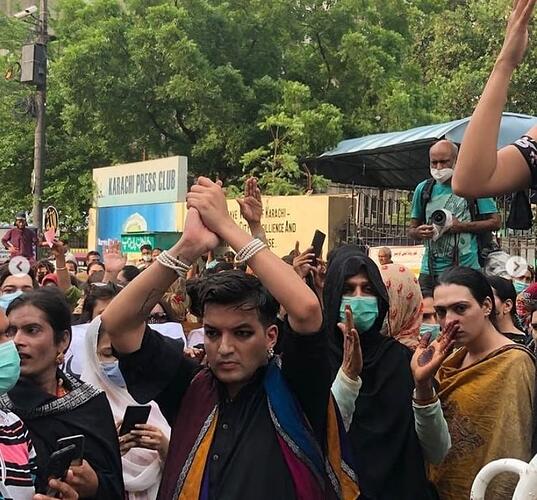 After surviving attempts of assault from an organized group of criminals and repeatedly raising his voice for the sake of justice and security, transgender activist Muhammad Moiz showed up to the Karachi Press Club to present a list of demands on behalf of the transgender community. The following demands have been presented by him in order to ensure just treatment and prosperity of the trans community in Pakistan:
Firstly, he demanded that the citizens of Pakistan discard colonial imperialists’ mindsets that go against the interests of Pakistan’s Khawaja sira community. He demanded help in dismantling social structures toxic to the trans community and not just stand by as they are subjected to violence and terror.

He demanded adequate and affordable healthcare and education facilities to be provided to khawaja siras and trans-feminine people and also demanded that employers should hire them for respectable positions. He also added that all khawaja siras and trans-feminine individuals everywhere should be treated with honor and respect. Other than the aforementioned demands from the people, he had a list of demands from the state.

Demands from the state included that the perpetrators of attacks on Dr. Moiz and Ms. Firdous, members of a group called the beelas, should be brought to justice within the coming week. He also demanded that the Sindh government must draft a legislation to protect the Khawaja Sira community of the province within this year. Another demand sought the setup of a special community to focus on cases regarding Khawaja siras in Sindh, with a helpline that they can use in case of emergencies to seek immediate help.

Moreover, it was demanded that the police must receive sensitivity training in order to understand the behavior of the beelas. He also demanded that issues which prevent transgender people from filing FIRs should be addressed. Moiz also asked for khawaja sira representation in legislating bodies; the national and provincial assemblies.

The final demand set forth by Moiz was the establishment of safe houses for members of the community so they can seek refuge when needed, especially the younger members who are prone to violence. On a final note, Moiz quoted on his social media profile the following: " We are all creatures of the Divine Will. All of us want to create a more just and beautiful world, as outlined by His Words in the Holy Quran. Unfortunately, we have been ignored for too long. None of us should be capable of being prejudiced against any living creature, because we are not above Him and His Love for all things alive. Help us overcome these injustices; it is God’s calling."

It is hoped that the Khawaja Sira community of the country receives the just and honorable treatment that they deserve. And may God make us more tolerant and loving towards his creation without prejudice.