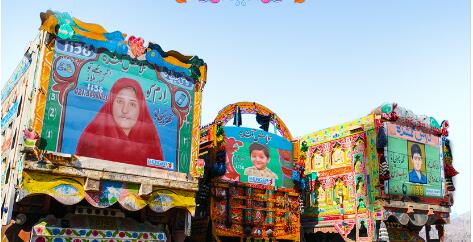 Truck art is a symbol of Pakistani culture. The vibrant paint strokes on the back of large
transport vehicles catch the eye of every traveler in its vicinity. A campaign launched by Berger paints in collaboration with the NGO Roshni helpline and artist Samar Minallah aimed to utilize the art for good, by getting the images of missing children painted at the backs of the trucks in order to raise awareness and encourage response. And what do you know, it helped locate 7 missing children!

In a country where more than 3000 children are displaced each year, this campaign spread mass awareness and allowed concerned people with information to contact the campaign managers. As it happened, more than 3000 calls were received, from which 500 provided substantial, helpful leads as to the whereabouts of the children.

The campaign is indeed a success story and goes to show how little cultural elements of our country can be so impactful and how seemingly trivial practices can have incredible turnout if utilized well.