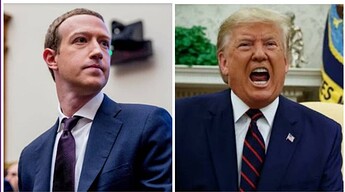 IMG_20210108_1659331030×575 143 KB
Mark Zuckerberg banned the social media accounts of ex-President of the United States for an indefinite period marking a theatrical escalation of the tension between Silicon Valley and the White House after Trump brandished the web to help incite an uprising at the US Capitol.
Mark Zuckerberg said that he believed that the risks of allowing Trump to use their services are myriad therefore the block on the accounts will be extended to an indefinite period until the amicable and peaceful transition of power.
This is marked as the most severe penalty against him throughout 4 years of his reign in which he has made countless false statements, attacked critics, and spread divisive verbiage. Twitter also blocked him on Wednesday but lifted the blockage the very next morning.
These sites took these aggressive steps after a violent mob stormed the House and Senate interrupting the process to certify Joe Biden as the President. The lawmakers are pushed towards a lockdown situation. Facebook and Twitter faced a lot of criticism as they could have taken steps before the deadly riot came into existence.