New Zealand marks two years since these shootings took place. Flashback:
Two consecutive mass shootings occurred at mosques in a terrorist attack in Christchurch, New Zealand, during Friday Prayer on 15 March 2019. The attack, carried out by a single gunman who entered both mosques, began at the Al Noor Mosque in the suburb of Riccarton at 1:40 pm and continued at Linwood Islamic Centre at 1:52 pm. He killed 51 people and injured 40. 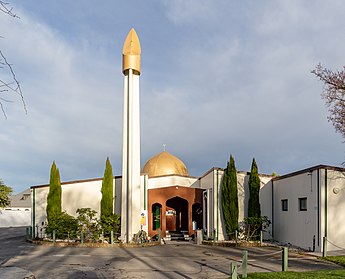 Brenton Harrison Tarrant, a 28-year-old man from Grafton, New South Wales, Australia, was arrested shortly afterward. He was described in media reports as a white supremacist and part of the alt-right. He had live-streamed the first shooting on Facebook, and prior to the attack, had published an online manifesto; both the video and manifesto were subsequently banned in New Zealand and Australia. After the police investigation, he was charged with 51 murders, 40 attempted murders, and engaging in a terrorist act. He initially pleaded not guilty to all charges, with the trial expected to start on 2 June 2020. On 26 March 2020, he changed his plea to guilty on all charges. He was sentenced to life imprisonment without the possibility of parole on 27 August 2020. It was the first time life imprisonment without parole sentence was handed down in New Zealand.

So, this is what happened on that day. May the souls rest in peace.