Vandalism in Peshawar: Destruction of a Hindu shrine 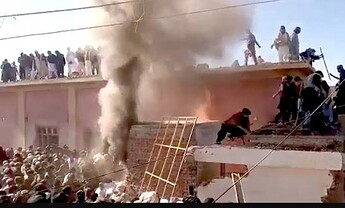 IMG_20210103_1947391080×654 170 KB
An indignant mob has been reported to destroy Shri Paramhans Ji Maharaj’s samadhi shrine in Teri area of Karak, Peshawar on 30 Dec 2020 setting it ablaze. The mob received ample condemnation from the right activists and religious minorities.
The Police professed that 31 people had been arrested in raids linked to the attack, including a leader of an Islamist party and former local administrator.
The chief minister of Khyber-Pakhtunkhwa, Mahmood Khan said that the government has agreed on rebuilding the shrine. A meeting was held for the cause in which Dr. Shoaib Suddle of the one-man minority rights commission, the chief minister of KPK, Dr. Ramesh Kumar, the current MNA for minority and provincial chief secretary Dr. Kazim Niaz ensured their presence.
The chief minister, Mahmood Khan strongly condemned the act of deviltry and asserted that the government is soon to rebuild the shrine and is determined to expose those who are involved in this heinous act. He further said that the government will take adequate steps to ensure that no such activity is observed in the future. On a very similar day, special assistant to the chief minister on minority affairs Wazirzada and assistant to the chief minister on auqaf and religious affairs Zahoor Shakir proclaimed that PC-I of the renovation has been prepared and the shrine will be rebuilt by government’s funds. Dr. Shoaib and MNA Ramesh expressed satisfaction over this instinct.
Mr. Wazirzada said that the act presumably was not preplanned and the mob was employed purposely in that area. He appreciated the government’s timely response to the incident as it ensured the arrest of the 43 suspects and the 3 accused persons within 24 hours. He further advised India to learn from Pakistan who gives no attention to the hurting sentiments of the minorities. Mosques are burnt and members of Sikh and Muslim minorities are killed in India but the government doesn’t feel any remorse. He told that the representatives of the government after negotiations with political and religious leaders figured out the matter peacefully. He informed that in 1997 and 2013 identical incidents took place but no action was taken.
Afterward, DIG Hafeez Cheema informed that more arrests are expected once the forensic report is out.
In the meantime, the provincial president of PPP Minority Wing Naseeb Chand claimed the resignation of the chief minister’s special assistant on religious affairs over the Karak incident.
The former MNA of JUI-F, Maulana Shah Abdul Aziz demanded the formation of a committee to investigate the incident which according to him was necessary for disclosing the fact that the local people were not involved in it.
Dr. Kazim Niaz visited the affected place leading a high-level delegation. He met with the members of the local peace committee and exchanged views. He told that the happening took place because of certain provoking speeches and the act is condemned by most of the Pakistanis.