Aladdin is a fictional character who is a kind thief. He rides on his magical carpet along with his friend Genie. He also loves Jasmine who is the princess of Abgarah. So far, we have listened to his stories, seen him in movies, dramas and even in cartoons. But do you know he also exists in real life? Wait, what? You will probably think I am kidding but, yeah he exists in this world.

A video has taken the internet by storm in which a young man dressed in an ‘Aladdin’ costume is spotted riding a ‘floating’ carpet on the streets of Dubai. After that, he has gone viral in the United Arab Emirates. The young man dressed like ‘Aladdin’ is none other than a YouTuber ‘RhyzOrDie’. 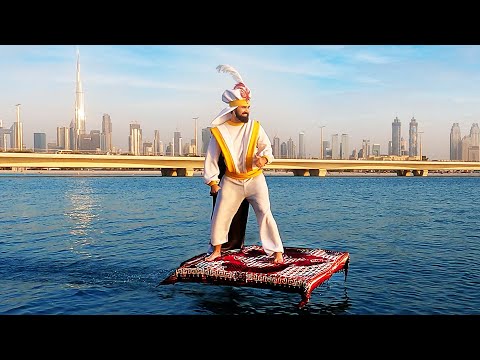 That is not the whole picture as RhyzOrDie also shared a video of behind the scenes in which he revealed how he created the ‘floating’ carpet. He did it by crafting a PVC pipe frame around an electronic longboard. He then fixed a carpet on top of it to give it a magical look. Interesting huh!

On top of that, he fixed a carpet to his surfboard before taking it out to the sea. In this way, anyone can easily get baffled because it sure looks like that the carpet is gliding over the surface of the water. The YouTuber also shared the secret that he used an ‘eFoil board’ for the stunt. It means a surfboard with an electric propeller. 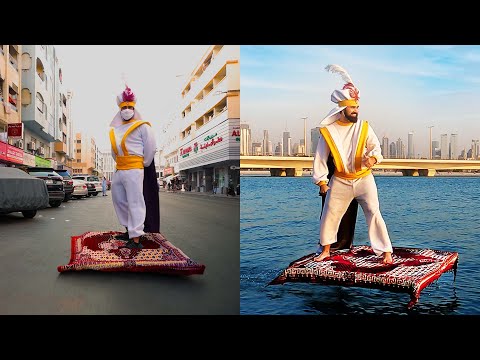 “The eFoil rider doesn’t need to paddle for waves or pump with their legs to keep the board in motion. An eFoil is the world’s smallest personal, motorized watercraft.”

As the people took a shine to the viral video, the Youtuber thanked them for their overwhelming response and asked them to share the video as much as possible. He also has done similar impressive things in the past. He told:

“The highly anticipated behind-the-scenes look of how we made the “Aladdin and the Magic Carpet” video. Hopefully, this inspires someone out there to take action on envisioned ideas. Thanks so much for the overwhelming support, the new following, and a huge thanks to the journalist who landed me on the following pages. You guys are awesome!”.